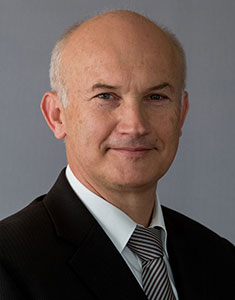 With an Aerospace Engineer degree from the Technical University of Munich, Norbert Vogel started his career in 1992 where he worked in IT area, before joining MTU in 1999 as an IT-System Planer and Representative PDM (Product Data Management).

In 2007, Norbert Vogel was appointed Head of Production Support for the production of the first Flight Test Engines (FTE) in EuroProp International. Two years later, he was called by MTU Aero Engines and named Senior Manager Embedded Software Development.

Until 2013, Norbert Vogel holds several positions such as Senior Manager Quality, Certification and CIP, Senior Manager Processes, Methods or Certification. He also has been responsible for the Quality Management System and for all Quality Assurance activities for CMS software and hardware projects.

From 2013 to 2016, Norbert Vogel joined AES Embedded Solutions GmbH where he was appointed Director Quality, Certification and CIP.