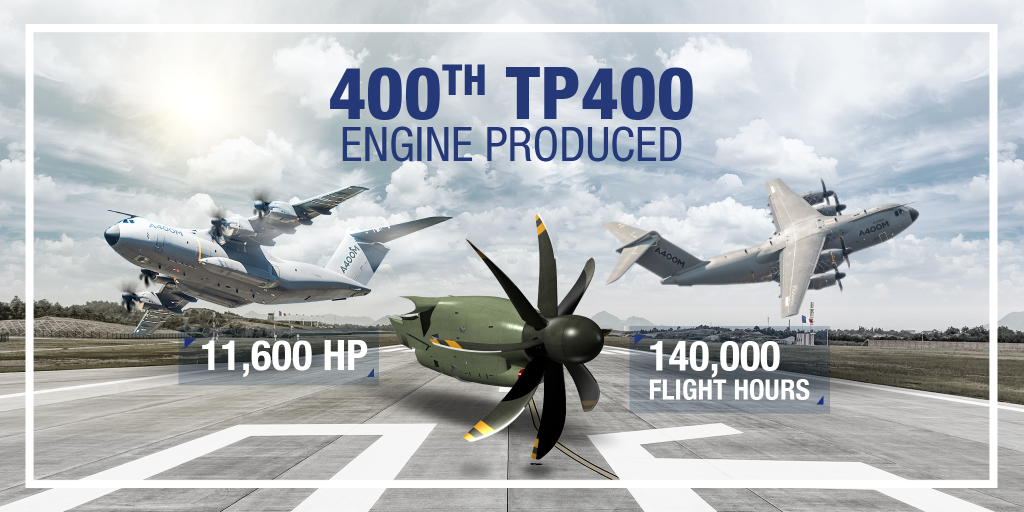 EPI achieves the assembly of the 400th TP400 turboprop

July 18, 2018 – Europrop International GmbH (EPI) has completed the assembly of the 400th TP400 engine in Munich where its final assembly line is located.

“The delivery of the 400th TP400 demonstrates our organization capacity to pace our customers’ needs in terms of production,” said Christophe Bruneau, President of EPI. “Based on the long-term experience and the state-of-the-art technologies of each partner, we are working on engine continuous improvements to ensure our customers the best availability as part of their operations.”

EPI was created in 2002 to design, develop and produce the TP400 engine which has been chosen in 2003 to power the new generation A400M military aircraft. This aircraft was designed by Airbus Defense and Space to meet Air Force’s requirements for several key missions, such as strategic, tactical airlift and air-to-air refueling.

The TP400 is a key asset to the A400M’s unrivaled capabilities, while delivering an output of 11,620 shaft horsepower making it the most powerful turboprop in the West. With a high autonomy of 4,800 nm (8900 km), the TP400-D6 can power extended round trip sorties from its main operating base. This is also the first military engine to have a civil certification by EASA.

“The forces and the pilots are pleased with the TP400’s power which enables them to perform their future missions in any condition”, continues Christophe Bruneau. “Thanks to this engine, the A400M is flying almost as fast as a commercial aircraft.”

Since the first A400M entered into service in 2013 with the French Air Force, the TP400 has logged more than 140,000 flight hours. The TP400-powered A400M aircraft are currently operated around the world by six Air Forces (Germany, United Kingdom, France, Spain, Turkey and Malaysia).

Europrop International at a glance